At a time when global displacement is at a record high, the Italian government recently held its own coast guard and the people it had rescued hostage ‘in a cynical gambit to force other European Union countries to take the migrants and asylum seekers.‘Human rights Watch.

There are currently 68.5 million people that have been forcibly displaced worldwide. Most of the worlds 25 million refugees come from three countries, Syria, Afghanistan and South Sudan.

Luca Catalano Gonzaga founded Witness Image which combines photography and journalism to document stories around the world where people have experienced conflict, poverty and natural disasters. Gonzago has previously been awarded a CARE International for Humanitarian Reportage award for coverage on child labour in Nepal.

In 2016  Gonzaga took to the Libyan waters, north of Sabratha, on the Italian Coast Guard ship Ubaldo Diciotti and witnessed its operations at sea. Gonzaga returned in 2017, capturing part of the migratory flow in the Mediterranean. Alongside the crew of the Diciotti, as they negotiate the risks involved with rescue operations. Recovering the dead and aiding the injured affects rescue workers in different ways and the crew of the Dicotti has been exposed to unimaginable hardships in the course of their work.

International Maritime law states that all vessels have a ‘legal obligation to assist boats in distress’.MSF Since its launch, the Diciotti and its crew of sixty have saved more than 15.000 migrants. The ship can accommodate more than 600 migrants. On a daily basis, it has been conducting several rescue operations. In addition to rescue missions, the crew carries out anti-pollution missions in defense of the marine environment.

“A mass grave is being created in the Mediterranean Sea. Faced with thousands of desperate people fleeing wars and crises, Europe has closed its borders, forcing people in search of protection to risk their lives and die at sea. There is no more time to think, these lives must be saved now.”

Médecins Sans Frontières/ Doctors Without Borders is an international humanitarian medical non-governmental organisation that has also been operating in the Mediterranean sea. MSF teams save people’s lives in conflict zones, natural disasters and epidemics around the world. Non-governmental organisations account for a minority of search and rescue operations in the Central Mediterranean. MSF search and rescue operations are coordinated by the Maritime Rescue Coordination Center (MRCC) in Rome.

‘The main ports of arrival between January and April 2018 are those in Sicily (Augusta, Catania, Pozzallo, Lampedusa and Trapani).’ IOM MIXED MIGRATION FLOWS IN THE MEDITERRANEAN  April 2018

Once aboard people are given thermal blankets, basic essentials and medical teams conduct health and safety screenings which are considered the second phase of the rescue operation. Following these stages, it is customary for the Italian Coast Guard operations center to tell a ship the port at which it is to dock. The choice of a port is made by the Italian Interior Ministry, which is responsible for handling the distribution of migrants arriving on Italian soil.

The Italian government recently held its own coast guard and the people it had rescued hostage ‘in a cynical gambit to force other European Union countries to take the migrants and asylum seekers.‘Human rights Watch.

Roughly 29 unaccompanied children were amongst the 177 rescued migrants plunged into a waiting game as the ship floated in limbo before receiving permission to dock in Sicily. The absurdity did not end there, as an Italian government representative decided to insist on ‘pledges from European countries to take all of them before allowing them to leave the ship’.Human rights Watch Actions that further delayed people’s access to medical care after surviving journeys from Eritrea and Somalia.

‘on board the ship is inhumane. It unjustifiably delays their access to medical and psychological attention and thwarts their right to seek asylum. It may also, as suggested by Italy’s own independent guarantor of the rights of detained people, constitute unlawful deprivation of their liberty in violation of Italy’s Constitution and the European Convention on Human Rights.’HRW

Migrants were finally released from the ship, and an Italian government representative has been placed under formal investigation for illegal arrest, illegal confinement and abuse of office. 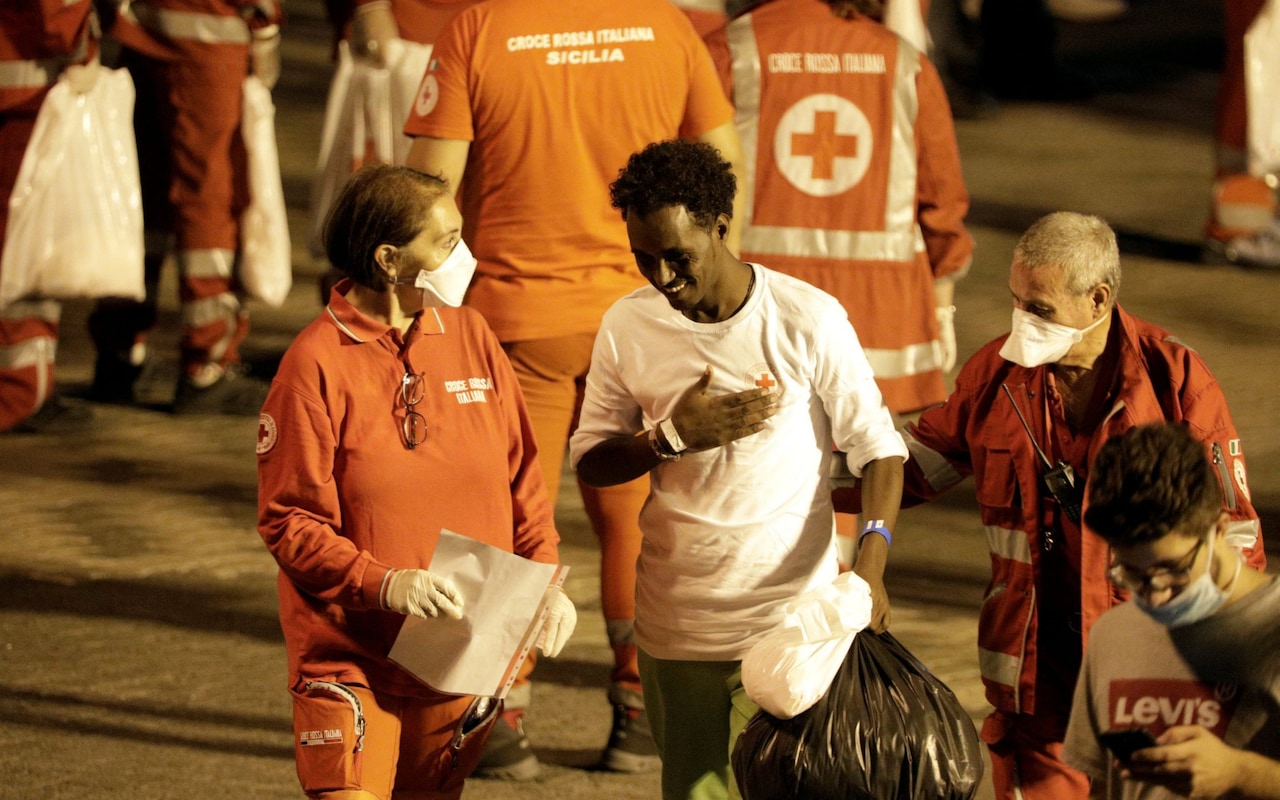 What a difference it would make if we used a way to communicate the right organisations and expertise for the refugees to contact, so they knew where to go and who to alert that they were coming. In addition, to the skills they brought and what their aspirations were if given the chance of asylum in a new host country?

Ideally, this exchange could be happening by SMS or online before their journey but indeed it would have huge value as a two-sided information dialogue process at any point.  Migration is a last resort – Displaced is a circumstance NOT an identity!

We all need to find ways to incorporate legally and productively all individuals that seek to participate and engage with host countries and that starts with a way that host authorities and policymakers can listen vis near real-time datasets and visualisations to the reality of the human beings behind the label “migrant” “refugee” “asylum seeker”.

We need to engage with issues of migration and integration in a way that  the displaced persons’ historical, current and aspirational contexts easily and efficiently can be understood and facilitated and for each displaced person to be referred safely and securely directly to only those relevant from amongst the many organisations that can advise and support them competently.

In the answer to the status quo, we hope to develop the MyInform Service to do just that.

This site uses Akismet to reduce spam. Learn how your comment data is processed.

68.5m displaced (larger than population of UK)
44,000 displaced/day | 20 displaced/min
10.3 million persons newly displaced (2016)
52% of displaced are children (2017)
Uganda = Africa's largest refugee hosting country with 1.4m displaced in 2018
85% of the world’s refugees are hosted in countries in developing regions
25,500 refugee children in Rhino Camp in schools with No internet + No reliable power
123,243 registered refugees at Rhino Camp in Uganda

Which Chinese phone giant dominates sales in Africa against Apple ?

Transsion Holdings Limited is a parent company to Tecno, Infinix and Itel. Companies that have successfully manufactured mobile phone devices specifically for the African market. Product features The combination of variety and availability of affordable feature phones, in addition to a […]

Operating aid to displaced populations, stateless people and refugees around the world is a complex task.  Innovative advances in technology are one way that organisations such as UNHCR have attempted to improve aid effectiveness. Critical is making sure  A) that […]

See all our news